Among California’s National Parks, there are some incredible natural wonders – but nowhere compares to Yosemite National Park. Instrumental in inspiring the preservation movement that lead to founding the National Park Service, Yosemite was established in 1890. Since then, millions of people have made the journey to the park, especially the Yosemite Valley. But can you visit Yosemite in just one day?

I made my first trip to Yosemite in the winter of 2017; this was before I even moved to California! During that trip, Mr. V and I had one day to explore the Yosemite Valley and take in the sights. Unfortunately and unbeknownst to us, we visited on one of the park’s free days and there were so many cars that it ended up detracting from our experience. (And made it so I only have really bad photos, which is why I’m sharing those of far more talented photographers to give you a sense of how beautiful Yosemite really is…)

Whether you’re planning a trip on a free day, specifically setting out to visit Yosemite, or doing a California or West Coast National Park road trip – Yosemite is a must-do. Here’s how to spend one day in Yosemite National Park; if you have more time, I also have a three-day guide to Yosemite.

In this post, I promote travel to a national park that is the traditional lands of the Me-Wuk (Southern Sierra Miwok) people. With respect, I make a formal land acknowledgment, extending my appreciation and respect to the past and present people of these lands. To learn more about the peoples who call these lands home, I invite you to explore Native Land.

Before jumping into my suggested itinerary for one day in Yosemite National Park, I want to cover the logistics. I find answering these questions in advance allows you to have a hiccup-free trip.

Since Yosemite National Park is quite large, it is broken up into several different parts. These sections include the following:

As you can probably tell, trying to cover all of these sections of Yosemite National Park in just one day simply isn’t plausible. For that reason, this post focuses on how to spend one day in Yosemite Valley in particular, although there are a couple of quick stops in Bridalveil Creek as well.

If you would like to see more of Yosemite National Park, I highly recommend extending your trip. You could easily spend days exploring everything that this wonderful national park has to offer. If you plan on staying longer head over to learn what all you can do in 3 days in Yosemite.

As part of the National Park system, Yosemite operates under the same rules as other parks. You’ll either need to pay an entrance fee or use a National Parks Pass to enter.

Here are you options:

You can read more about the fees – and check that the above is accurate – on the Yosemite NPS website.

Technically, there are a few main roads that wind their way through Yosemite National Park. But Yosemite Valley only has a couple of roads that you need to pay attention to; Southside Drive and Northside Drive. Together, these two streets make a loop that goes to the majority of your stops on this one-day Yosemite itinerary

As for parking, that’s one of the main downsides of Yosemite National Park. As one of the most popular national parks in the United States, thousands of people visit this national park every single day. Consequently, parking can be quite a challenge.

Your best bet is to arrive as early as possible – ideally before 9 a.m. even on weekdays – to snag a spot in one of the three parking lots in Yosemite Valley: Yosemite Village, Curry Village, and Yosemite Falls. Then, you’ll simply leave your car there all day and take the park’s free shuttle to follow this itinerary. (Note: The free shuttle is not running in 2021 due to the ongoing pandemic.)

You have two main options while visiting Yosemite National Park: you can either stay in the park or near the park.

If you’re hoping to stay in the park, you can choose between hotels and campgrounds. Some of the most popular hotels include Yosemite Valley Lodge, Ahwahnee Hotel, White Wolf Lodge, and Wawona Hotel.

But if you’d prefer to stay closer to nature, you can camp in the park instead. For canvas tent options (i.e. pre-established areas with tents already set up for you), you can choose between Housekeeping Camp, Curry Village (both in Yosemite Valley), and Tuolumne Meadows Lodge (outside Yosemite Valley). And for traditional campground options, there are ten different sites throughout the park for you to choose from, although there is only one in Yosemite Valley.

If you’re okay to do a little bit of extra driving, you can stay at a hotel near the park instead. A few great accommodation options include The Groveland Hotel, Tenaya Lodge at Yosemite, and Yosemite View Lodge.

What to Do in Yosemite National Park (When You Only Have One Day!)

Now that the logistics are out of the way, let’s move on to how to spend one day in Yosemite National Park. From sunrise to sunset (and afterward!), you will be able to get the most out of your time in Yosemite.

Catch the Sunrise at Valley View

You’ll start your day at Yosemite National Park bright and early by catching the sunrise at Valley View. From this spot, you can see one of the most iconic views of Yosemite National Park, with El Capitan on one side at the Twin Cathedral Rocks and Spires on the other. Add the golden glow of sunrise to the mix, and it’s absolutely picture-perfect.

If there’s one view that’s even more famous than Valley View, it’s Tunnel View. This scenic pullout allows you to see Half Dome, El Capitan, and Bridalveil Fall! Between the striking mountains and the bright green trees, it’s quite a sight to see. So take a few pictures, enjoy the landscape, maybe grab a few minutes of meditation before the crowds begin, and then continue on your day.

Technically, there’s no official scenic loop in Yosemite National Park. But if you drive on Southside Drive and then loop back around onto Northside Drive (both of which are one-way roads, so that’s what you have to do…), you’ll make a full circle while simultaneously seeing some of the best sites in this iconic national park.

After Tunnel View, make your way back down to the valley floor and continue on Southside Drive back into the valley. Your first hike of the day is to Bridalveil Fall. As one of the most popular and shortest hikes in Yosemite, it has earned a spot on this one-day itinerary – but you want to get up early to get a parking spot here as the lot is tiny.

It’s just a half-mile hike from the parking lot to Bridalveil Fall. And at the end, you’ll be rewarded with a stunning 620-foot waterfall. (That’s like two Statues of Liberty stacked on top of each other!) In the winter months, Bridalveil Fall doesn’t completely freeze – instead, the mist from the waterfall becomes delicate snow that covers the entire area in a blanket of white.

If there’s one thing Yosemite lacks, it’s eating options… but I’m not really complaining, as I don’t want any golden arches or the smell of Auntie Anne’s pretzels wafting among the trees. Instead, plan ahead and pack a picnic lunch.

Sentinel Beach is the place to go, but don’t let the name “beach” confuse you. While you are on the banks of the Merced River, this area is still forested and all about the views of the Yosemite Valley around you.

When you’re reenergized again, the next stop on your Yosemite National Park one-day itinerary is the Cook’s Meadow Loop. This one-mile hike allows you to catch a glimpse of many of the most famous Yosemite features, including Half Dome, Lower Yosemite Falls, Sentinel Rock, and Glacier Point.

You know me: I always think stopping at the visitor center is worth it when visiting a National Park! While visiting the Yosemite National Park visitor center (which is located toward the end of the valley, rather than at the entrance), you can learn everything you’d like to know about the park – from the geology of the cliffs to the patterns of the animals to the types of plants present in Yosemite Valley.

As an added bonus, if you have any additional questions, there are always park rangers ready to answer them for you! (Also don’t forget to grab your passport stamp!)

Drive (or Hike!) to Glacier Point

After the visitor center, your next destination is Glacier Point. There are two ways to reach this scenic overlook (which is located above Yosemite Valley on the south side): drive or hike.

If you choose to drive, it’s a 32-mile journey each way. Drive out of the valley on Northside Drive, turn left across the Pohono Bridge onto Southside Drive, then take Wawona Road to Glacier Point Road and follow that to the end. There are plenty of scenic spots along the way, so there’s no need to rush this!

If you’d rather hike, be prepared: the route that takes you to Glacier Point (Four Mile Trail) is a challenging 4.8-mile hike (one way) with 3,200 feet of elevation change. Since the goal is to catch the sunset at Glacier Point, you’ll need to be prepared for the almost five-mile hike back in the twilight and dark (bring a headlamp for sure!).

Personally, I would drive since you’re short on time with only one day in Yosemite, but if you love hiking, this is an epic one!

Glacier Point is probably the best place to watch the sunset in Yosemite since it provides you an excellent look westward across the Yosemite Valley. As mentioned, it takes some effort to get here, though I think it’s worth it for the view. From Glacier Point, you can take in sweeping views of the valley, Half Dome (pictured above), and Yosemite Falls.

But your single day in Yosemite National Park isn’t over quite yet! As you know, I love stargazing – and Yosemite is a fantastic spot for it in the Western Sierras.

There are a couple of spots I recommend for stargazing in Yosemite; one is where you watched the sunset!

Any of these will give you a view of the night sky as well as Yosemite’s iconic rock formations. If you want more advice about stargazing in Yosemite, I’ve got a full guide here.

There you have it: how to spend one day in Yosemite, from sunrise to sunset – and beyond! Do you have questions about visiting Yosemite for one day? Let me know in the comments! 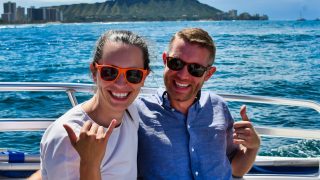 Next →
3 Days on Oahu: The Perfect Itinerary for Hawaii's 'Gathering Place'
Click here to cancel reply.